Shooting From The Hip: Conquering My First 50K - The Pistol Ultra 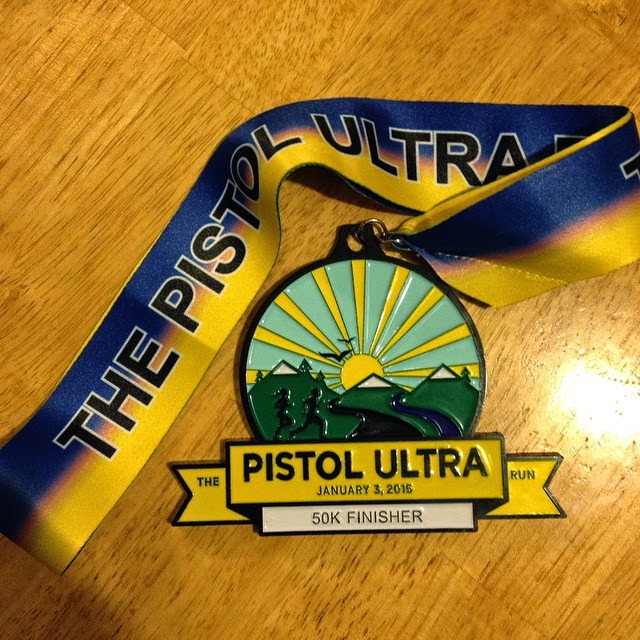 I drank the ultra koolaid, and I LOVED it!

On Saturday (Jan. 3), I conquered my first 50K at the Pistol Ultra in Alcoa, Tenn. And to be quite honest, I'm struggling on writing this post as I can't seem to find all the words to describe what an amazing journey this was.

Words that come to mind when thinking about my experience include: fun, challenging, painful, exhilarating, amazing, mind-blowing, and a party.

Heading into this race, I truly did not know what to expect. I really did not have this race on my radar. Sure, I had thought about running it 3-4 months ago, but I let the idea slide as I focused on my marathon which was on Oct. 25. Then after my rough experience at the Spinx Carolina Marathon, I told myself I wanted to take a break from the long distances for a while. Nothing past 13.1 miles for at least the next six months is what I promised I hold myself to.

I even told my lovely bride that I wasn't going to run a marathon until at least late in 2015 or early 2016. (Technically, I didn't lie.)

But as I noted in a recent post, my friend Chris was trying to get his running mojo back and thought running the Pistol Ultra 50K would do the trick. Consequently, he asked me to join him in the fun.

I would love to say that I wrestled with this decision to at least give the non-runners and those who can't fathom running a marathon, let alone anything farther, the impression I have some sort of sanity. But alas, it was a pretty simple decision for me.

Had no scheduling conflicts for that weekend, so I said, 'why not?,' and signed up. After all, the race had a 30-hour time limit, so I knew I could finish within that time frame.

Signing up for the race on Nov. 15, I knew I had 7 weeks to get ready for race day. No biggie since I was coming off a marathon 3 weeks prior. The mileage had already ben built up.

However, life threw me a curveball.

On Nov. 16, the day after I registered for the 50K, the dreaded PF flared up in my left foot.

Realizing there was not much time to waste in diagnosis, I did not take this lightly and immediately sought to treat it so I would be ready come race day. After 20 days of not running, I was able to hit the pavement once again. (NOTE: During my time off from running, I kept up my cardio and fitness with bike work, strength training and yoga. Have to credit my coach Jeff for keeping in top shape during the setback.)

The PF is not totally gone, even as I write, but it's on the way out. And even though I was back to running, I still had no idea how I would do. In the final weeks leading up to race day, the most miles I had logged in a week was 34, and my longest run was 13 miles.

In the week leading up to race day, I was feeling great. My body was ready, and mentally, I knew I was going to conquer this distance.

Plus, I was getting excited about getting to race with Chris and have our friend Jeff join us to crew and pace us. And come to find out, a number of my running buddies from the Knoxville area were going to be there. I knew a few were going to be there, but I didn't know there would be so many of there racing and/or pacing.

I knew this was going to be a fun time.

The course was pretty much contained to a greenway which ran from Alcoa, Tenn., to Maryville, Tenn. There was an additional loop that ran through a park just past the Alcoa Middle School (where the start/finish line was), so there was very little time we spent on actual roads. While the race was 100 percent on pavement, it was fairly confined to the greenway and/or wide sidewalks. 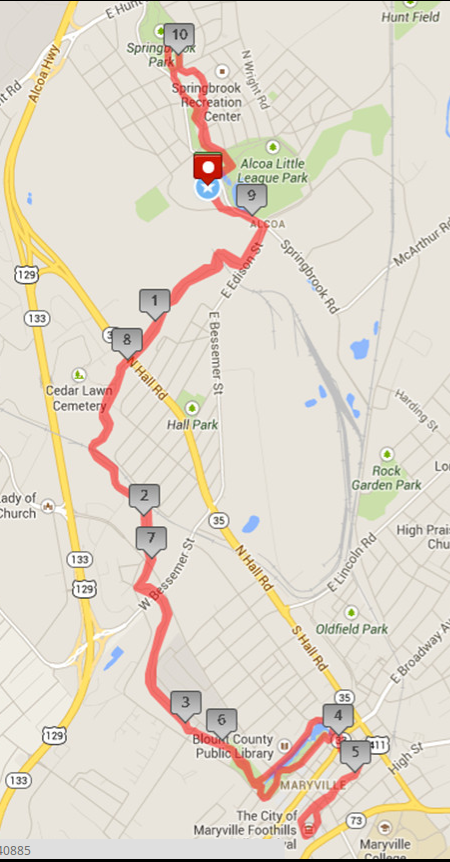 For the 50K we had to do 3 loops with the third loop being shortened, meaning we didn't have to go the full distance once we got to Maryville and we didn't have to do the loop through the park a third time. It's hard to explain, but they had the course marked well, so if you were paying attention, you didn't run any extra.

During the first 11-plus mile loop, I ran with my buddy Chris some as well as a fellow Idiots Running Club member Crystal and her two friends. Running with them made the thought of running 31-plus miles not seem daunting. Running was light and easy, just having fun out there and enjoying the weather and the beautiful scenery.

Running with Crystal is a hoot! She keeps you entertained with her rambling and ADD. No lie, she'll be talking about something get distracted and start on a different topic. But don't worry, she always comes back to the original topic to finish that discussion. She just has to chase a few squirrels first. 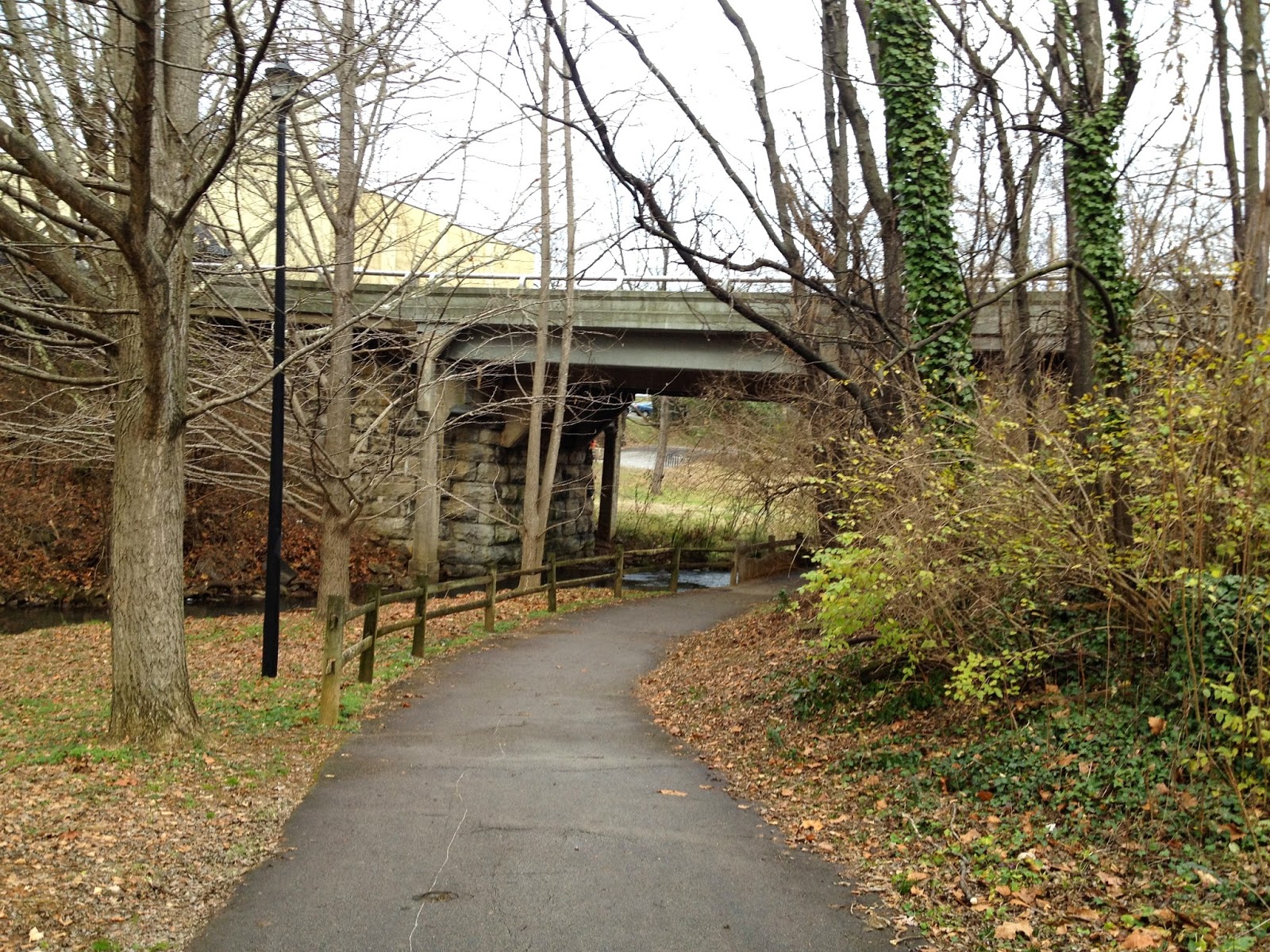 I made it through the first 9 miles fine, but as Chris and I began running the park loop, my left foot started acting up during mile 10. And thus began my fun.

At that point, I eased off and let Chris go on. The next 10 miles were a struggle for me, and I ran them mostly alone. While my foot was hurting, it was not the type of pain that the injury would get worse if I continued. As long as I could stand the discomfort, I could soldier on. 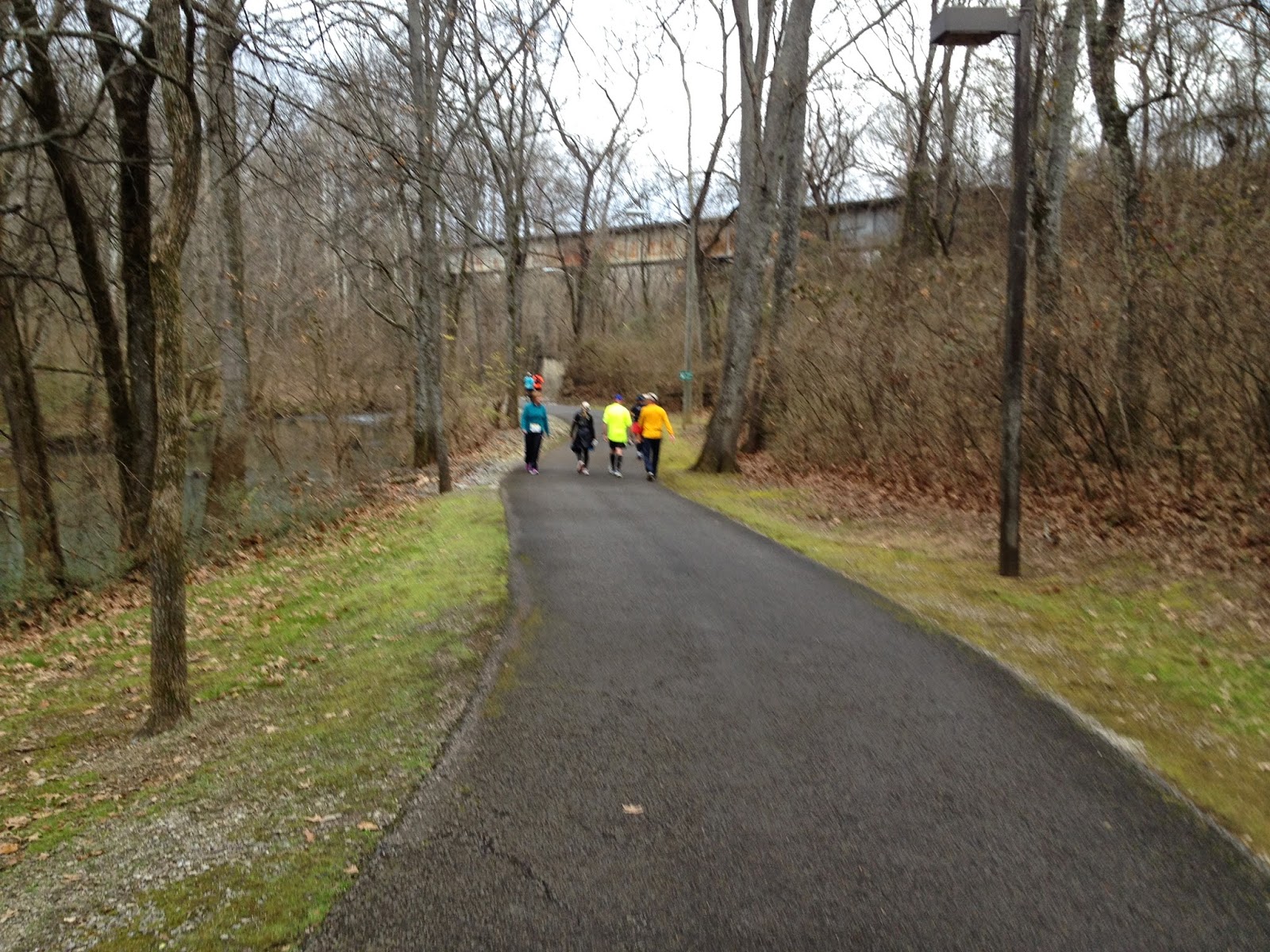 Somewhere along the way during loop 2, I figured out that I could 'trick' my foot in to feeling OK for a bit by running for 5-6 minutes and then walking for a bit. It was like the foot was fine doing either one for a little while, but then began to act up when it got 'bored' doing what it was doing.

As I was coming back up to the school before heading back to through the park to complete loop 2 (around the mile 20 mark), I saw my friend Brooke at the start/finish line. She had ran the relay and was waiting for teammate to get back. Brooke asked how I was doing, and I responded by strongly stating my foot was hurting. 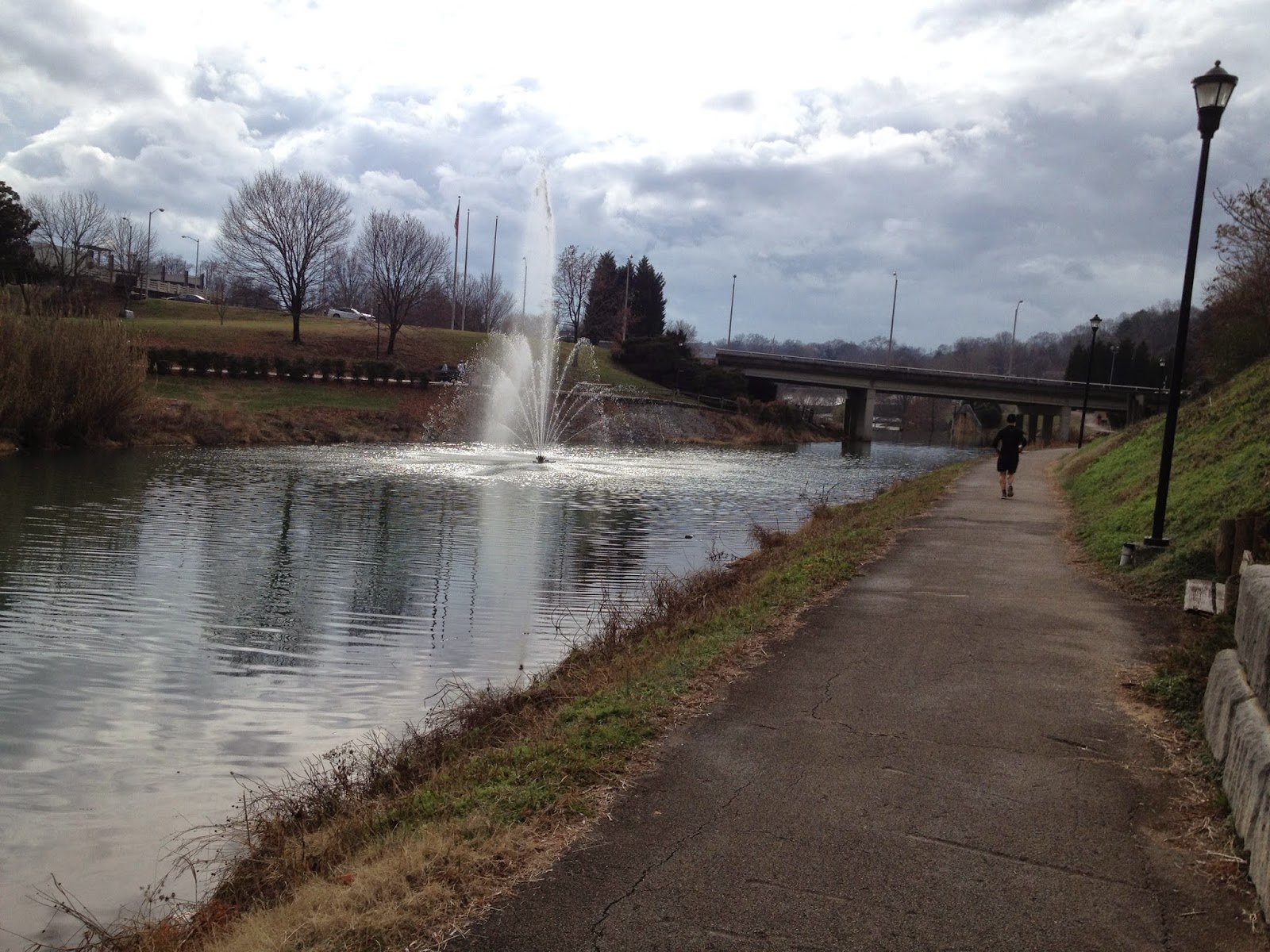 Heading out to the park, I asked her to set my remaining water bottles out on the table at our post so I could refill my pack before heading back out for the final loop. During the loop through the park, I really began to find my rhythm, and I was encouraged when I got back to the start/finish line and to our tent that Chris and Jeff hadn't started out for the final loop yet.

I quickly filled my hydration pack and changed shirts and get back out on the road with them. As we started out, another runner Greg was there. He was running a bit disabled as well. 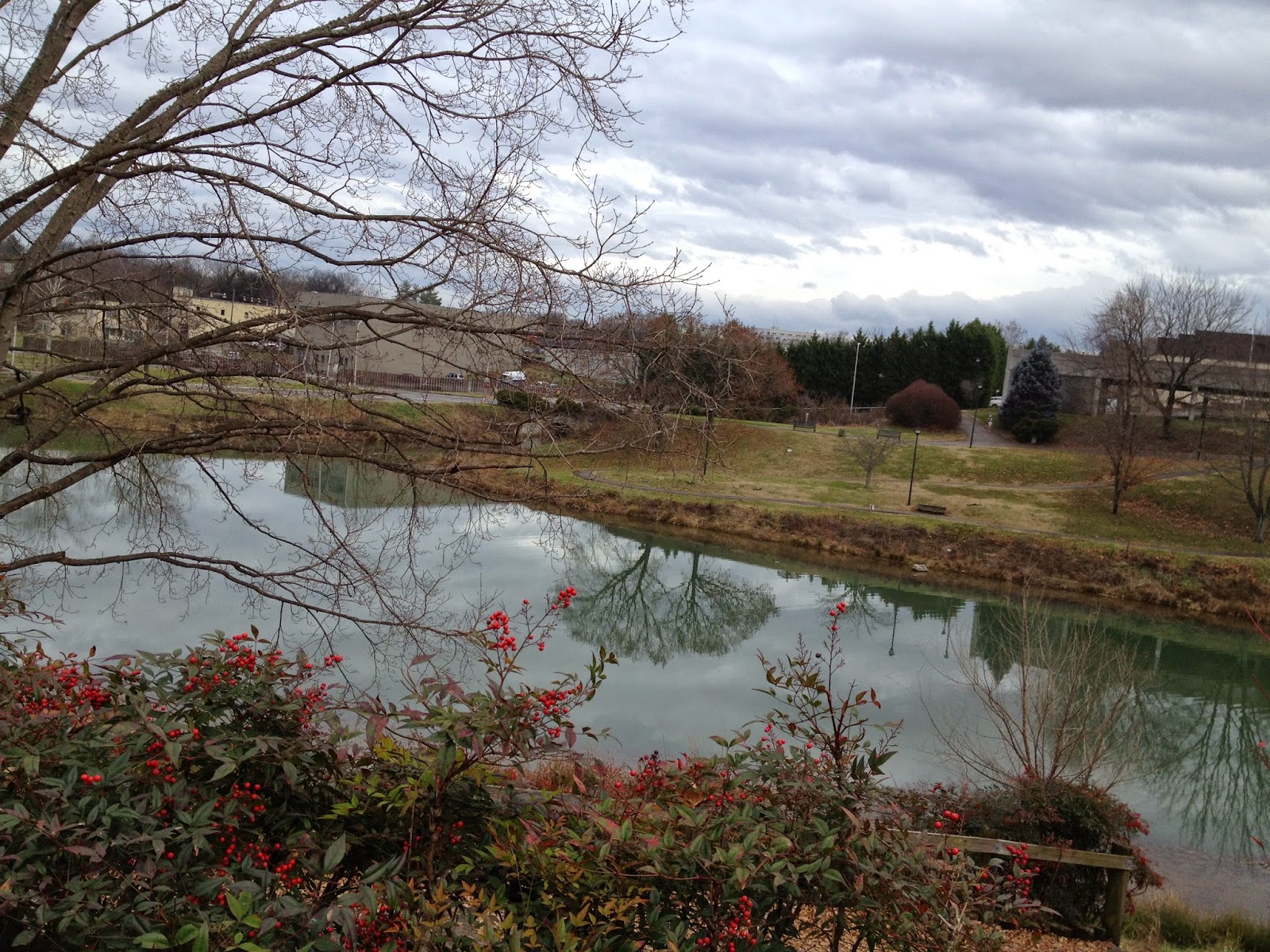 Greg had a deviated septum and had issues breathing, meaning he couldn't run for long periods. It worked out perfectly for the 2 of us to run together as we both needed walk breaks. After such a struggle through the second loop, this third one was becoming a piece of cake.

Plus, it was awesome getting to know a new runner. I mean, where else can you meet a tatted up, nuclear maintenance technician? It was fascinating finding out he had only been running for a little over a year and how he seemed to loved the changing races, especially on the trails.

Hated we separated so quickly at the finish, but I think we both were spent.

Throughout the race, and especially during the final loop, I walked up a good portion of the hills. My goal was to finish, and I wanted to make sure I had enough in the tank to do so. However, the one hill I did run up was at the finish line.

It gleamed like a beacon on a hill on a foggy night. I knew I was on the home stretch, so I gave it all I had and ran up that hill and across the finish line to complete my first 50K in 7 hours, 11 minutes and 15 seconds.

What surprised me was that I finished ahead of Crystal and her friends (Rose and Amanda) as well as Chris and Jeff since they all started the third loop either ahead or with me. But it was a blast getting to cheer them on to the finish line.

The Pistol Ultra is a fantastic event. Will Jorgensen and his wife Gail do an outstanding job putting on these races as the race directors. From the expo to pre-race dinner the night before, to having legendary runner Jeff Galloway there, to everything else that goes into hosting an event. Will has done an amazing job in communicating with all the participants leading up to the race, during the event and even afterward. Plus, they surprised everyone by throwing in a pair of running gloves in the goody bag!

I am so glad that the Pistol was my first ultra marathon, and yes, I will be back.

With the course mainly on a greenway, there was very little opportunity for spectators to come out and encourage runners. But since the course was loop, you constantly had runners passing you either coming toward you or from behind you. And everyone was encouraging each other. But of course, runners are awesome that way.

And I had always heard about all the food that was available at ultras, but it was a bit hard to believe until I saw it. And honestly, I thought it was crazy to have some of those foods out and available for runners. But that was before I ran an ultra. Not going to lie, I really liked have pretzels, chips, turkey and cheddar wraps, and yes even a Krispy Kreme donut available out on the course.

Even had one of Crystal's crack brownies. Peanut butter and chocolate, OH MY!

My goal was to run an ultra in 2014. So, I missed it by 3 days. Who cares? With the amazing experience I had, it was definitely worth it.

The only thing missing from this race was my family. Almost always my lovely bride Genople joins me for my crazy exploits and one or both our kids tags along as well. Since I traveled with Chris and Jeff, they didn't come along, but that doesn't mean their presence was not felt. I could never do something like this without their support. Even though they weren't there in person, I knew they were cheering me on to the finish line.
Posted by Unknown at 11:33 AM

Why the name 'Runners Anonymous'? Am I ashamed of being a runner? Absolutely not.

I chose this name because I believe there are numerous of other individuals who are/were just like me who don't know they are a runner. It wasn't until 2010 at the age of 38 that I joined the running family. A good friend challenged me to join him in running a half marathon, and for whatever reason, I did.

And I was hooked.

Through this blog, I hope to share my experiences and the knowledge I learn along the way while hoping to inspire you to join the 'race.'